Seizing that we’re talking about i/o devices, I’ll comment you a couple of things in which researchers are working.

On one hand, we’ve got multi-touch screens: a touchscreen that detects pressure on several points simultaneously. They allow to use more than one finger, both hands or to accomodate several users at the same time. It’s a Jeff Han’s project, from New York University, and you can see a demo (mpeg o quicktime/mp-4) in his web site (via Barrapunto).

On the other hand, the Microsoft Center for Information Work is testing several technologies. The ones that like me the most are its videoconferencing room (on the top) and its enveloping, 48:9, panoramic screen (at the bottom). You can see them in the CIW picture galleries (1 and 2). You can also see a mini-video (because of its lenght and its size). 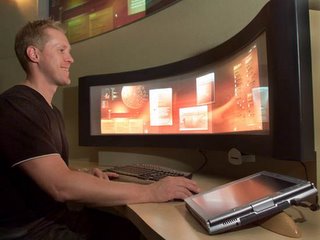